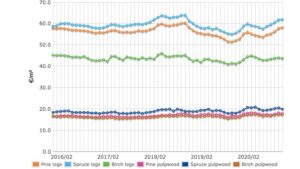 The average stumpage price was EUR 17.6 per cubic metre for pine pulpwood, EUR 19.9 for spruce pulpwood and EUR 16.9 for birch pulpwood. Real pulpwood price level increased by four per cent from the previous year. In the standing sales of both pulpwood and logs, spruce unit prices increased more than those of pine.

In 2020, pulpwood accounted for 70 per cent of the total delivery sales volume in Finland. The average roadside price was EUR 31.8 per cubic metre for pine pulpwood, EUR 33.0 for spruce pulpwood and EUR 32.1 for birch pulpwood. These prices developed in a different direction than stumpage prices: in real terms, the price of pulpwood decreased by two per cent from the previous year.

In 2020, a total of 37.0 million cubic metres of industrial roundwood purchased from non-industrial private forests were recorded in Finland’s wood trade statistics. Of this volume, standing sales accounted for 86 per cent and delivery sales for 14 per cent. Of all assortments, pine pulpwood was purchased the most, accounting for more than one fourth of the total wood trade volume. Spruce logs made up almost the same and pine logs one sixth of the total wood volume.

Price changes are examined in real terms in this statistics, and changes in monetary value are based on the wholesale price index. Wholesale prices decreased by approximately three per cent in 2020 from the previous year. For example, in standing sales, the unit prices of logs increased in real terms, but decreased when viewed at current prices (at the prices of each year).