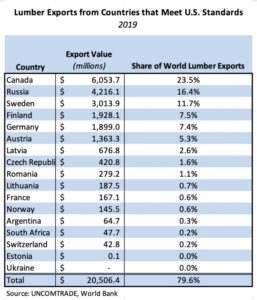 The United States consumed roughly 47 billion board feet of softwood lumber in 2019, 30.8% of which came from 48 foreign countries. All softwood lumber imports are not created equally, however.

The lumber used to frame a home in the United States must meet stringent standards set by the American Lumber Standard Committee and only 16 foreign countries produce lumber that is graded for U.S. framing, as National Association of Home Builders (NAHB) reported.

The 16 countries in the second table accounted for 79.6% of global softwood lumber exports by value in 2019 and three – Canada, Sweden, and Russia – accounted for over half.

Although 83 countries exported softwood lumber in 2019, the above countries comprised 11 of the top 15 exporters (ex-USA, which ranks 7th). Only five countries outside of the list (ex-US) have a global export share in excess of 1%.

Canada has historically been the largest foreign source of softwood

The sharp decline began when an average 20% tariff was placed on softwood lumber imports coming from Canada. The then-historic price run of 2018 made offshore imports viable, the same dynamic that – coupled with planned reductions of Canadian timber harvests – further eroded Canada’s share in 2020.

As Canada’s share has fallen, however, other countries have filled the void. Germany’s exports to the United States have increased dramatically since 2016 as has its share of US imports, which have risen from 0.6% to 4.6% over that period. Sweden’s share has climbed relatively steadily since 2013, when it was 0.3%, through 2020 during which it was 1.9%.

Although domestic softwood lumber production has climbed steadily since the Great Recession, it remains below the prior two cyclic peaks of 39.8 and 38.2 billion board feet of 2005 and 1987, respectively. In addition, employment in the sawmill industry declined by 3.5% (-3,200 jobs) between December 2019 and December 2020.

Domestic softwood lumber producers have only been capable of meeting roughly 70% of US demand over the past 30 years. That figure drops to 60%-70% during periods of robust demand for

and construction of homes. As the United States faces building materials shortages across a wide array of products, the country’s softwood lumber supply solutions will likely involve both increasing domestic production and seeking new sources of imports.