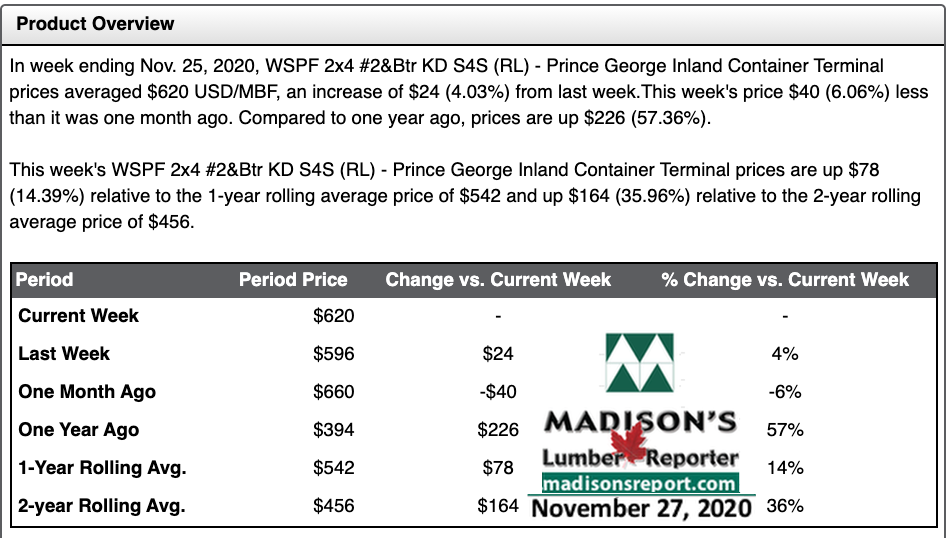 US housing starts were mostly flat in 2019. At this time last year softwood lumber sales improved markedly and prices started to rise from quite low levels. As the beginning of 2020 came on, the data on US home building was much improved over the previous year, sending demand for construction framing dimension softwood lumber higher. Sawmills and other lumber industry players were quite encouraged as to what the US home building market would do come spring.
Usually this time of year, in the weeks after US Thanksgiving, marks the annual slowdown in forestry and lumber manufacturing across Canada and the US.

This year we saw record-shattering lumber prices, then a serious correction after Labour Day, which is usual. Yet half-way through November 2020 prices started to rise again as US construction activity was literally non-stop.

This week, following US Thanksgiving 2020, is carrying on that recent trend as demand for wood has resurged. As with last week, once again prices are up due to ongoing hot lumber sales.
Other major news for this week is the publishing on the US Federal Register, finally, of reduced anti-dumping and countervailing duties on Canadian softwood lumber imports into the US. Details here: https://madisonsreport.com/2020/11/30/federal-register-publication-ar1-final-for-softwood-lumber-anti-dumping-portion/ . Both of these were announced in February, following the usual Administrative Review by the US Commerce Department.

Steady takeaway prevailed in the US Western S-P-F market last week. Buyers were frequently if sporadically at the table as they did their best to secure product from perpetually-undersupplied sawmills and distributors. Producers pushed their order files into early- or mid-December as availability became more limited by the day. While the general tone among buyers was one of barely-contained urgency, they continued to purchase small volumes fairly regularly in an effort to keep projects going where possible yet still remain lean to avoid carrying too much inventory through year-end.

Demand for Canadian Western S-P-F lumber continued to pour in from all over North America last week before being marginally dampened by US customers stepping away from the market on Thursday for American Thanksgiving. Momentum from the previous week’s strong sales carried into last week and precipitated four-week order files on nearly every item at sawmill. Producers in Canada were a little bit surprised by how busy they were during this normally-slow holiday week.

“It was another strange week for Eastern stocking wholesalers as demand came in fits and starts. Prices were all over the place, with vendors trying to guess how much inventory their competitors were carrying. Much of the tri-state area was in various states of lockdown, yet customers were apparently busy. At any rate; going into 2021 prices will be hundreds of dollars higher per thousand board feet than they were at the start of 2020.” — Madison’s Lumber Reporter