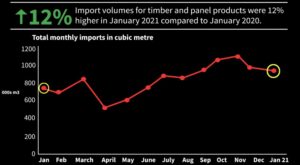 The recovery in UK import volume seen in the second half of 2020 continued in January 2021 with timber and panel imports 12% higher than in January 2020.

When comparing January 2021 with January 2020 the statistics revealed that among the individual product categories:

The increase in import volumes comes amidst a resurgent housing market, with housing starts up by 26% in UK in Q4 2020 as compared to Q4 2019.

A growth in overall wood product imports could be noticed in UK amidst a competitive international market which is keeping supply tight the world over, and a surge in construction in the UK, David Hopkins, CEO of the Timber Trade Federation, said. “This growth is being supported by a buoyant housing market, a government eager to invest, and consumers choosing to spend money saved during the pandemic on home improvements, with some £160 billion saved during the last year.“