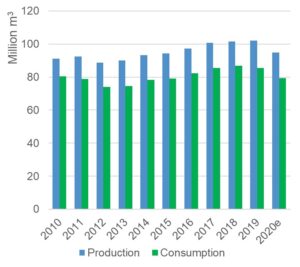 Until recently, the total annual consumption of softwood lumber in Europe has been steadily increasing and in 2019 reached the level of 85 million m 3. However, at the beginning of 2020, the market fell sharply and the long-term trend stopped.

The reason is the outbreak of the coronavirus. Today, due to the unpredictable course of the pandemic is expected that the total consumption in 2020 will fall and at the end of the year will be about 80 million m 3 .

Despite the decline, 2020 cannot be called a bad year for most market participants. At the end of the summer, the market unexpectedly picked up momentum and showed clear signs of recovery thanks to strong growth in the DIY segment and, as a result, an increase in demand for building materials.

Balance of supply and demand for softwood lumber in Europe

Lumber consumption in Europe has traditionally been driven by the construction and furniture sectors. The largest markets are concentrated in Germany, France and the UK. Consumption is expected to continue to grow in the coming years, driven by the rapid development of global wood product markets and related industries. The EU’s Climate and Energy Framework Program envisages reducing greenhouse gas emissions by at least 40% by 2030. To make the plans come true, timber industrial construction has a key role to play in increasing carbon stocks.

For this reason, demand for wood products, especially those with higher value added (eg CLT, I-beams and other EWPs) is expected to grow, which will also lead to higher demand for sawnwood. Timber construction should be one of the key drivers of the lumber market in the future. Timber construction currently enjoys significant government support in Europe through various funding mechanisms such as the European Green Deal. Similar support is provided in other countries, such as the United States.

The US timber construction sector is expected to grow rapidly over the next five years, which will also affect the European sawmill industry. A number of experts point out that export volumes to the United States, especially from Germany and Sweden, could grow significantly in the coming years to meet North American demand.

Deficiency of high-quality softwood lumber due to bark beetle damage

In the context of a rapidly growing market, manufacturing enterprises must be provided with high-quality raw materials. Recently, this has become a tangible problem for the countries of Central Europe. In particular, the availability of high quality spruce logs has declined. The main reason is the spread and damage by bark beetles, caused, in large part, by climate change and global warming. In 2019, according to various estimates, about 120 million m 3 were damaged by the bark beetlewood. An overabundance of damaged raw materials in the factories’ warehouses has reduced prices for low-grade sawn timber in European markets. In the long term, the availability of quality spruce sawlogs in Central Europe is likely to continue to decline unfavorably. Local procurers have already begun replacing bark beetle-prone breeds with more resilient species, as well as adopting new forestry and forestry practices.

Based on the investments announced on the market, over the next five years, more than 4.5 million m 3 of new production facilities are expected in Europe . The largest projects are the Metsä Group Rauma sawmill in Finland and UAB Juodeliai in Lithuania. In the latter, it is planned to produce mainly hardwood lumber. It should also be noted that among the announced investments, more and more projects are planned for the subsequent processing of sawn timber, i.e. production and use of sawn timber as a raw material for higher value-added products (eg EWP engineered structural timber).