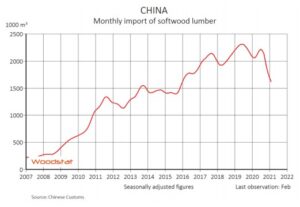 The steady increase in softwood lumber import in China continued during the first six months of 2020, but then entered a falling trend. Softwood lumber import in China during 2020 amounted to 24.8 million m3 which means a decrease by 10% (compared to 2019), according to figures from the Chinese customs. It is worth mentioning that the import ten years ago amounted to only 9.37 million m3 .

During January-February 2021 the import decreased by 18% to 2.58 million m3 (compared to 2020). The seasonally adjusted trend in February is approximately 1.6 million m3 (figure 1). That figure can be compared to the average figure for 2019 which was 2.25 million m3 . However, when looking forward we are convinced that the trend soon will increase again.

Softwood lumber import in the Middle East increased by 4% during 2020 (compared to 2019) and the trend line is in the beginning of 2021 running at the highest level since 2016. Import in North Africa decreased by 14% in 2020 and this is closely linked to a much smaller demand in Egypt.

Just a few years ago, the situation was reversed. Import from Canada is at the beginning of 2021 at the lowest level since 2009 (figure 2).

As can be seen in figure 2, Russia totally dominates as a supplier of softwood lumber to China. Eight years ago, Canada was the main supplier. No doubt, during a quite short period we have seen dramatic changes among the main suppliers, where Russia and Europe have taken larger market shares and Canada has lost share.

The smoothed line for the market share for Europe is at the beginning of 2021 running at approximately 23% compared to 8% just five years ago. The market share for Canada decreased during the same period from 25% to 10%. Other exporters have had minor changes (figure 3).

A growing population and massive migration are still the main factors for softwood lumber consumption in China and will continue to support an increasing demand for lumber. The furniture industry was also in 2020 an important consumer of softwood lumber and the forecast is positive.

We can see more wooden construction and a growing interest in using lumber as a nature friendly material. Russia was the main supplier and delivered 14.8 million m3 softwood lumber to China during 2020 (-13% compared to 2019). Second largest supplier was Europe (main European exporters) with a total export of 5.2 million m3 (+24%). The import from Canada was 2.8 million m3 (-37%) (table 1).

As can be seen in figure 4 the import from the European exporters (excluding Russia) has increased clearly during the past years and several countries reached new top levels during 2020.

The very strong increase of shipments from Ukraine and Belarus have of course changed the market shares for European exporters dramatically (excluding Russia, smoothed time series). Both Sweden and Finland have reduced their market shares during the past few years and are now at very low levels for each country (figure 5).

The rapidly increasing import in China is of course closely linked to the construction sector where residential building again is the main sector, but there is still also a strong demand for furniture and other further processed goods. In 2020, the amount of started housing surpassed the amount of sold housing. Housing starts during January-February this year increased by 69% compared to same period 2020 (figure 7). Compared to the situation a few years ago the floorspace for sale is much lower (figure 8). This stabilizes the building industry long term, and the ongoing urbanization is an important factor and will no doubt increase the demand for residential buildings further.