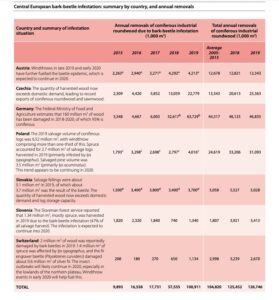 Damaged volume due to the beetle infestation exceeded 50 million m3 in 2018. The epidemic worsened in 2019, with damaged volume almost double that in 2018. Preliminary estimates for 2020 indicate that beetle damaged volumes will be at similar levels to 2019.

Coniferous industrial roundwood prices in Europe dropped as a result, particularly in central Europe. Initially this occurred only in beetle-affected areas, but eventually it spilled over into unaffected areas, with many of the countries suffering bark-beetle outbreaks becoming net exporters of roundwood (in some cases reversing traditional trade flows of coniferous industrial roundwood).

Germany, for example, became a net exporter of softwood roundwood after being a significant net importer for many years.

The global trade of softwood logs amounted to about 93 million m3 in 2019, with just under half destined for China.

A significant component of the logs exported to China was salvaged spruce, generally shipped in containers returning to China. China imported 9% more softwood logs in 2019 than in 2018 but paid 2% less (in US dollar terms). Imports of softwood logs to China in 2019 increased 18-fold from Germany (to 3.8 million m3 ) and 12-fold from Czechia (to 2.3 million m3 ).

COVID-19 has affected the industrial production and international trade of many products and therefore the shipping of standard containers. With fewer containers coming from Asia to Europe, fewer empty containers need to be shipped back to Asia. Consequently, freight rates have increased dramatically in 2020 for shipping from Europe to China (as of April 2020) . Higher freight rates will have a detrimental effect on export opportunities.

Most damaged wood (e.g. from trees killed by insects, fire or windthrown) retains its full potential value if harvested immediately. Time lags between tree mortality and end use, however, increase the potential for degrade, starting with stains and shrinkage cracks (affecting appearance but not strength), followed eventually by decay. There is concern that beetle-hit trees could go to waste. Some countries have taken measures to support forest owners in salvaging affected stands (to limit the further spread of the bark-beetle outbreak) and storing harvested logs in a supersaturated state (which significantly slows degrade and decay).

The COVID-19 pandemic has happened at a particularly bad time for the bark-beetle salvage, depressing demand when salvage logs must be used quickly to avoid degradation and decay.

The post Bark beetle damaged volume in Europe expected to be at the same levels as in 2019 appeared first on Timber Industry News.