Brussels has been accused of driving building businesses across Europe to the brink of insolvency after imposing antidumping duties on imports of Russian birch plywood.

The anti-dumping duty – which adds a charge of as much as 15 percent to Russian birch plywood – risks piling more pressure on companies already reeling from chronic supply shortages and battling a surge in inflation, according to a letter signed by more than 100 companies.

Officials imposed the anti-dumping tariff following an investigation into a surge in cheap Russian birch plywood exports, amid fears producers from the country were flooding the European Union market and pricing out domestic rivals.

On 7 October, the Birch Plywood Alliance sent a letter to the Commission expressing regret that the antidumping duties proposed by the European Commission on Russian birch plywood.

The combined effect of shortages, potential duties, and the incessantly increasing prices will be hard-hitting, the letter says. Therefore, the Alliance urges the Commission to suspend the proposed anti-dumping duties should they get adopted by the Member States.

The text of the letter:

The Birch Plywood Alliance, representing 133 members from 25 EU Member States, regrets the antidumping duties proposed by the European Commission on Russian birch plywood. The proposal simply does not consider the ongoing price hike, the resulting market turbulence, the current raw materials shortage, and – above all – the fact that duties will hurt EU users of birch plywood and European companies.

Continuing the trend from the last months, the average price for birch plywood has risen throughout September. As a result, compared to July 2019 average plywood prices have increased by 270%, from 485 EUR/m3 to 1305 EUR/m3.1 This does not come as a surprise, as it is expected for global timber prices to continue increasing for the foreseeable future. For example, the World Bank forecasted that timber prices keep climbing at least until 2024.2

The market dynamics causing the price increase are structural, the main factor being the rise in demand from the construction sector. Following the Commission’s emphasis on using wood products in the Green Deal, Renovation Wave Communication, and Forestry Strategy for 2030, Europe’s public policies will only reinforce this trend. For example, France already requires half of the materials used to construct public buildings to be wood or other natural substances.

The price hike is an enormous cost burden on European companies, including users of birch plywood, most of which are SMEs. Timber shortages have hampered business, stalled construction projects and left importers, distributors and users in the dark. In Belgium, 80% of companies active in the timber sector are affected by the shortages. Two thirds of the companies show delays of two weeks, and one third have delays of at least one month.

Moreover, EU users do not have alternatives to birch plywood. Other raw materials do not have the same technical characteristics and switching raw materials cannot be done without making major investments. For many of our members the entire production machinery – i.e. whole factories – would have to be replaced or restructured.

For these reasons, and the evidence provided during the consultations, we urge you to suspend the proposed anti-dumping duties. The combined effect of shortages, potential duties, and the incessantly increasing prices will be hard-hitting. A suspension might be the only respite for the EU’s birch plywood importers, distributors and end-users.

USNR and Wood Fiber merger to create a giant supplier

Two North American sawmill suppliers are joining forces: USNR and Wood Fiber will become the biggest supplier in the world.

US Natural Resources (USNR) and Wood Fiber Group have announced a merger that aims to create the world’s most comprehensive supplier of the equipment, technology and essential tooling used in wood processing facilities.

The merger plans to create an unmatched product range that can deliver complete solutions from project conception to building/installing processing lines, to supplying the spare parts, technical services, ancillary equipment, and custom-engineered cutting tools that their customers can rely on for optimum performance. The complementary nature of the two businesses will provide an opportunity to offer new products and services.

Procedures for assessing effectiveness of EUTR are inadequate

In a report published 4 October, the European Court of Auditors concluded that EC procedures for assessing effectiveness of the EU Timber Regulation (EUTR) are inadequate.

In the Special Report 21/2021: EU funding for biodiversity and climate change in EU forests: positive but limited results”, the Court of Auditors conclude that:

“Reporting under the Timber Regulation does not provide the information with which the Commission can analyse the quality of Member States’ monitoring activity, the national rules defining illegal logging or the procedures used for checks. Nor does it require Member States to substantiate their replies with supporting documents that would allow it to verify the accuracy or completeness of the information”.

The Court goes on to note that “we reviewed the national procedures for checking domestic logging in Germany, Spain and Poland in order to assess the content and extent of the checks and confirm the importance of the Commission’s role in monitoring. We found that procedural weaknesses and missing checks reduce the Timber Regulation’s effectiveness in practice”.

The rules in place in the Member State define whether timber is illegally harvested. To minimise the risk of illegally harvested timber reaching the market the Timber Regulation requires operators to exercise due diligence. To this end, they must collect information on timber type, country of harvest, supply chain and compliance with the rules, assessing any risk and, where necessary, taking remedial action.

The Commission concluded that, despite progress, continuous efforts were needed to ensure that the Regulation was put into practice consistently and effectively in all Member States. It found that the number of checks remained low compared to the number of operators and doubted that these low frequency checks would have a dissuasive effect.

According to the EC report, there were an estimated 3,042,884 domestic operators in 21 Member States, and checks were made on 13,078 (0.43 %) during the two-year reporting period. The next review of the effectiveness of the Timber Regulation, together with a fitness check, is due in December 2021.

The Court of Auditors go on to explain that the EC is responsible for reviewing the functioning and effectiveness of the Timber Regulation. Member State reporting is the main source of information for its reviews.

The Timber Regulation requires Member States to make available information on the application of the regulation and leaves it up to the Commission to establish a format and procedure by an implementing act.

The Commission has not issued an implementing act but it has set up an online reporting system to collect information on Member State checks in a standardised way.

According to the Court of Auditors, “Reporting focuses on the risk criteria for selecting operators, the number of checks, the time taken for checks, the type of information recorded, and penalties.

Reporting under the Timber Regulation does not provide the information with which the Commission can analyse the quality of Member States’ monitoring activity, the national rules defining illegal logging or the procedures used for checks. Nor does it require Member States to substantiate their replies with supporting documents that would allow it to verify the accuracy or completeness of the information”.

The post Procedures for assessing effectiveness of EUTR are inadequate appeared first on Timber Industry News. 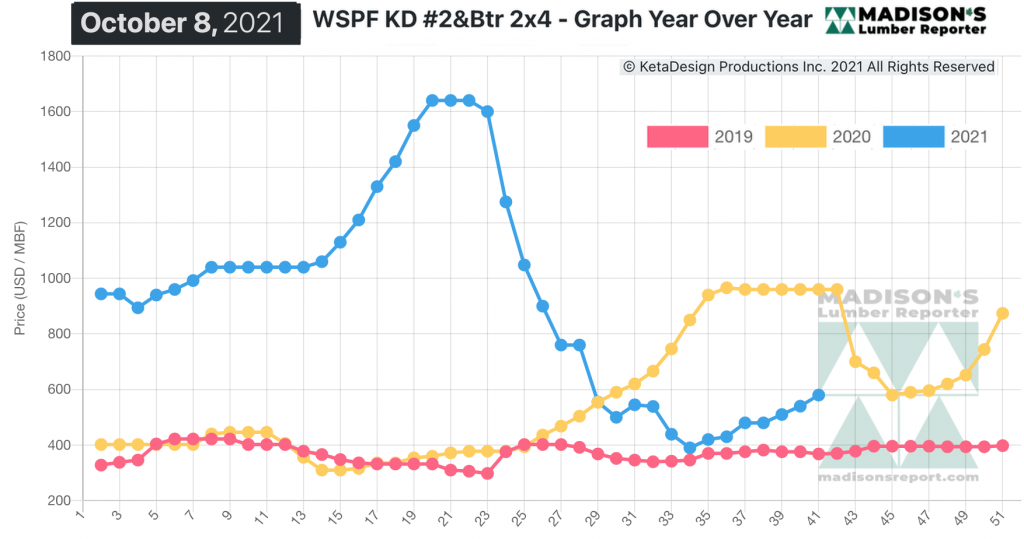 Similar to this time last year, when lumber prices started rising to reach what was then the all-time historical high, solid wood construction materials prices have been ticking up in the past few weeks. This is traditionally not a time for lumber prices to be increasing. The latest US housing starts and home sales and price data has been incredibly strong … will we see lumber prices keep going up to the end of this year? Only time will tell.

Plywood prices remained flat, while OSB levels in the West found some traction; steady demand persisted for studs and dimension.”

Southern Yellow Pine demand was stable in most categories, however with some softness in low grades. Another bout of heavy rain supplanted a recent spate of drier, timber harvesting-friendly weather in the US South. ”

Log stocks in China have not increased but there is a lot of volume on boats queuing at Chinese ports. Some industry observers estimate log stocks could be over 7m m3 including all the volume on the water.

Congestion in China has reached the point where at the end of August approximately six percent (599) of the worlds handy size fleet capacity was queueing off the China coast, PFOlsen reports. This has two effects, high demurrage, and reduced shipping capacity. This congestion has been caused by China authorities reacting to Covid outbreaks by closing ports, delaying berthing, and imposing strict procedures that have reduced ship handling capacity.

China’s softwood imports are generally facing market pressure from slow delivery.  Affected by this, the current prices of imported softwood logs have all corrected. The cumulative price decline in Guangdong is about 80-100 yuan/cubic meter (EUR 10-13/m3), and the operating pressure is huge.

Currently, the price of imported European spruce in China quickly dropped in September after climbing to 175 Euro/m3. The current price has returned to around 150-155 Euro/m3. However, even so, due to concerns about the demand side, Chinese timber merchants are very low in enthusiasm for receiving goods, and waiting has become the main way for merchants to avoid risk.