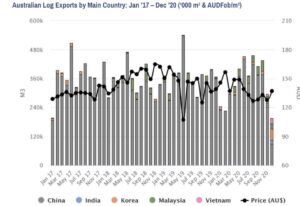 The dramatic fall saw exports 34% lower than for November, which was itself 32% lower than exports in October.

The average export price for December was AUDFob140.14/m3, up from AUDFob130.49/m3 recorded the prior month.

The sole driver for the steep decline in exports was import bans imposed by China, on shipments from Australia. Observably, other countries stepped in to the breach, but were unable to come close to covering the significant fall in  shipments to China.

This chart shows Australia’s log exports to China alone over the same time period. What it emphasises above all elder, is the significance of China to the log export trade.